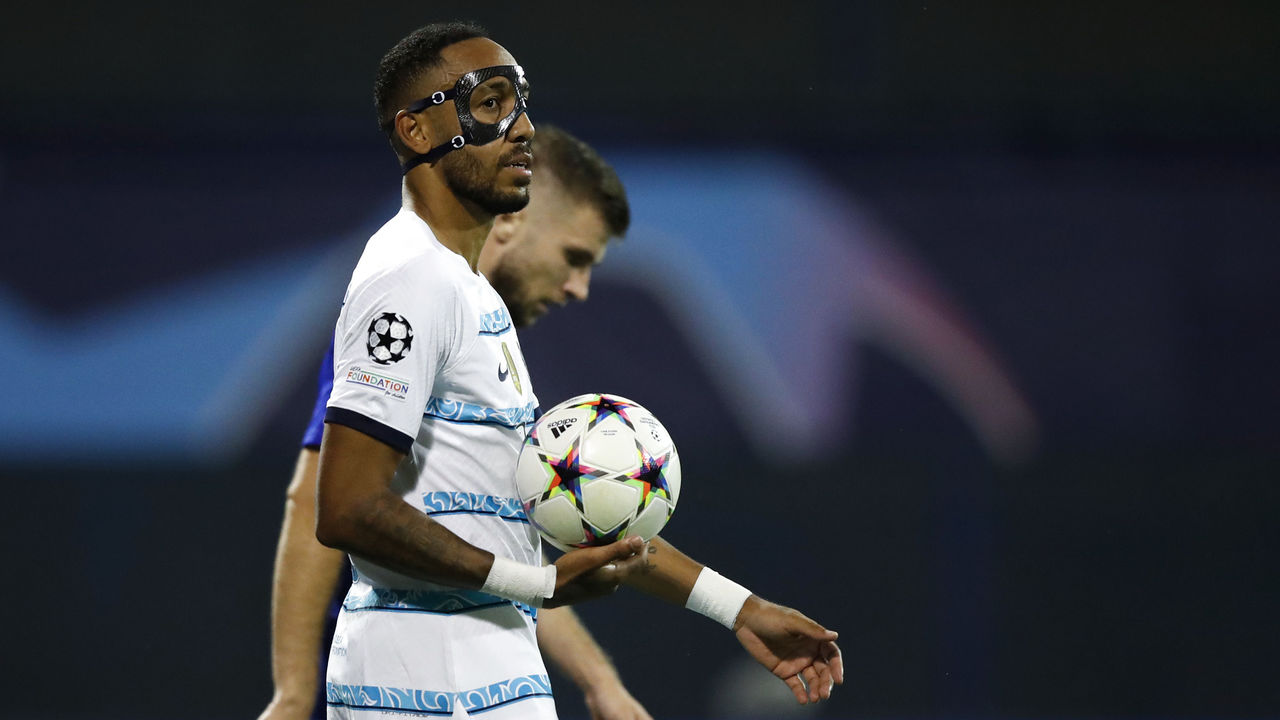 The Champions League is back! Below, we dissect the biggest talking points from Tuesday’s action as this season’s group stage kicked off in Europe’s premier club competition.

Thomas Tuchel hasn’t tried to lessen the weight of Chelsea’s No. 9 shirt. In fact, it’s quite the opposite. The head coach has repeatedly branded the digit a “curse” at Stamford Bridge.

Jimmy Floyd Hasselbaink, Hernan Crespo, and Tammy Abraham are the club’s most successful No. 9s this century, but Crespo and Abraham’s fruitful spells were only brief. Fernando Torres, Radamel Falcao, Alvaro Morata, and Gonzalo Higuain are among the players who’ve disappointed while donning the number, which is traditionally reserved for goalscorers.

“We demand a lot from our strikers in terms of defending. We want to be a physical and hard-working group, one that’s not shy to make it a physical game and not only a skillful game. That maybe plays a part,” Tuchel offered in February of how Chelsea’s traditional playing style could contribute to Romelu Lukaku’s struggles.

But deadline-day arrival Pierre-Emerick Aubameyang had no problem with inheriting Lukaku’s shirt. If the 33-year-old is to break the curse, he’ll have to do better than he did in Tuesday’s 1-0 loss at Dinamo Zagreb.

Aubameyang struggled to make a positive impact in his debut, showing none of the conviction that Chelsea so desperately need in the center-forward position. Instead, he strayed offside three times and failed to fire a single shot on target. Armando Broja replaced Aubameyang after 60 largely frustrating minutes.

His face mask may have narrowed his vision, and after sustaining injuries during a violent break-in attempt at his home near Barcelona, he may need some time to regain his confidence. But he shouldn’t need too much time to adapt to Tuchel’s tactics. The 49-year-old coached Aubameyang for two seasons at Borussia Dortmund, and it was in Germany where the former Gabonese international learned how to play his best football, operating as well up front as he would out of possession.

Based on his performance in the Croatian capital, Aubameyang has a long way to go before he can become that player once again.

Now more than ever, there are no illusions about Paris Saint-Germain’s aspirations. It’s Champions League title or bust.

And, not for the first time, some of the early signs were enormously promising. PSG toyed with Juventus for much of their 2-1 win Tuesday in the French capital. Kylian Mbappe, Neymar, and Lionel Messi seemed to be playing a different sport at times, connecting with intricate tricks and flicks and making a mockery of the Juve backline. Neymar’s scooped pass for Mbappe’s early goal, and the Frenchman’s thunderous volley itself, belong in the Louvre.

Leading 2-0 after just 22 minutes and in complete control, PSG should’ve gone for the jugular. They could’ve blown Juve away and made a huge statement of intent, even if beating this version of the Old Lady isn’t quite the accomplishment of previous years. Still, a marker could have been laid down.

Instead, PSG became complacent after the interval. The smooth, slick, devastating unit from the opening 45 minutes disappeared and let Juventus back into the match. PSG were, and are, comfortably the better team, but after Weston McKennie halved the deficit, doubt started the creep in for the hosts. The defense, untested in the first half, looked nervous and susceptible whenever a cross was whipped into the penalty area.

The scenes were somewhat reminiscent of PSG’s collapse against Real Madrid last season, only this time, Karim Benzema wasn’t there to punish them. A relatively feeble Juventus side worried PSG when it played on the front foot. How will Christophe Galtier’s men handle the pressure against better teams in the knockout stages? The question, yet again, lingers.

Juventus fans and pundits alike had their thesauruses out after the opening half of Tuesday’s eventual defeat to PSG, with Massimiliano Allegri’s team completely outclassed and overawed by the pace, skill, and intensity of Mbappe and his teammates. Juve, who have looked turgid in Serie A this season, struggled to string multiple passes together.

The knives were being sharpened for the Italian manager, whose monotonous tactics have come under heavy criticism of late.

Then, suddenly, McKennie’s aforementioned goal in the 53rd minute seemed to flip a switch. Juve pressed forward, Leandro Paredes started to dictate the tempo and spray passes across the pitch, and the Italian side found pockets of space between the lines instead of playing repetitive, low-risk balls out wide and simply recycling possession over and over again.

Ironically, that improvement is part of the issue. Juventus can play more aggressive, attractive football. The talent is there, even without the injured star trio of Federico Chiesa, Paul Pogba, and Angel Di Maria. Allegri can’t wait for all three to return before he takes the handbrake off; the latter pair likely won’t be back in full force until January, at the earliest.

The players need to take some responsibility, of course, but Allegri is being paid very handsomely to put his team in a position to win. Being overly conservative, even if it will occasionally deliver results, isn’t the right approach to get the best out of his team.

If things haven’t changed by the time PSG visit Turin in the reverse fixture in early November, the Tuscan manager could be in trouble.

Is Akanji one of the top summer bargains?

You wouldn’t have guessed it was Manuel Akanji’s Manchester City debut. He didn’t need to do much defensive work in his new side’s 4-0 win at Sevilla, but he was unhurried when he had the ball, using both feet as he moved it along to his new teammates. He completed 71 passes, creating two chances along the way.

It all seemed very familiar to Akanji.

Pep Guardiola likes to rotate his lineup, but he prefers to have a set center-back duo for most of his team’s matches. Ruben Dias and John Stones were his last regular pairing, but injuries and the occasional off-color performance from the latter have loosened that partnership’s hold on two spots in the lineup.

Nathan Ake has improved following some unconvincing displays earlier in his City career, but he seems to get injured just when he’s strung together a few starts. Meanwhile, Aymeric Laporte’s increasingly common spells on the sidelines may be the main reason City swooped for Akanji on deadline day; the Spaniard might not be back until mid-October after knee surgery.

So, Akanji could be very busy in his first few weeks in Manchester, and, based on his debut display, that’s no bad thing. He has the intelligence, awareness, and selflessness that should set him up well for Guardiola football, and at around £17 million, he could prove to be the bargain of the summer.

Well, that’s if Erling Haaland – who already has 12 City goals after his double against Sevilla – didn’t cost just £60 million.

Salzburg no pushovers in Group E

Salzburg, after all, are playing in the Champions League group stage for the fourth consecutive season. They routinely develop some of the world’s most promising talent, most notably Haaland, and press as relentlessly as the very best teams in Europe. It should come as no surprise they held Milan to a 1-1 draw – they managed to do the same against Bayern Munich last season.

Given Chelsea’s early struggles, Salzburg can envision a path into the round of 16, especially with Swiss forward Noah Okafor developing into a fine scorer and dribbler and 19-year-old forward Benjamin Sesko showing promise in advance of his move to sister club RB Leipzig.

Salzburg took the game to Milan early in the first half, pressing the Rossoneri and limiting their time on the ball. The hosts had a goal and nine shots by the half-hour mark despite only having 35% possession. It was a devastating display that set the tone for the rest of the game. Salzburg’s defenders double-marked Rafael Leao, knowing they had to cut off an artery of Milan’s attack to stand a chance against the Italian champions. Though the Portuguese winger assisted the equalizer, he could’ve done a lot more damage.

By the end of the night, Salzburg’s players covered an average of 11.09 kilometers, trumping Milan’s 10.8 kilometers per outfielder. Even after starting the game so aggressively, the Austrian side sustained itself throughout the 90 minutes, doing the majority of its work off the ball.

10 thoughts from Matchday 3 in the Champions League

Roundtable: How to navigate injury-riddled rosters

Who will win World Cup 2022? Predictions, picks for champion, Golden Boot and more

He didn't watch soccer until he was in high school. Now Matt Turner is USA goalkeeper in World Cup

What to know about USMNT World Cup roster: Surprises, heartbreak and the countdown to Qatar