Can Jackson have that same affect on free agents this offseason?

It’s a legitimate question to ask, especially when it comes to wide receivers. After Jackson took over as starting quarterback and the Baltimore Ravens went with a run-heavy offense, their wide receivers produced an NFL-worst 45 catches for 520 yards over the final seven weeks of the regular season. 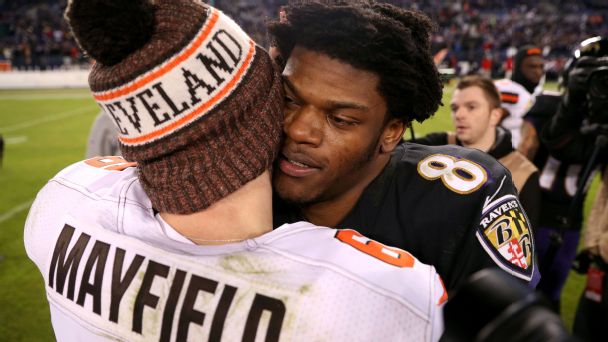 This could make it a hard sell for possible free-agent wide receivers like Golden Tate, Tyrell Williams and DeSean Jackson. The top available targets aren’t likely going to be inclined to go to an offense where wide receivers made their biggest impact blocking instead of catching long passes downfield.

While not asked specifically about wide receivers, coach John Harbaugh sees Jackson’s appeal as a positive in luring prospective free agents to Baltimore.

Opponents have been extremely complimentary of Jackson after facing him. Tampa Bay defensive lineman Gerald McCoy called Jackson “the reincarnation of Michael Vick.”

Jackson’s teammates have been strongly supportive of the rookie first-round pick. “He’s a baller, bro,” wide receiver Michael Crabtree said. “You want to catch passes; you want to have 100-yard games. But a win is a win.”

Ravens players continually were drawn toward Jackson’s affable nature, and he repeatedly initiated interaction with teammates. He connected with wide receiver John Brown inside the locker room more than on the field, sitting down next to him and cracking jokes.

But wide receivers who join Jackson are doing so based on projection, not actual production. Just half of his throws to wide receivers resulted in completions. The only team worse was the Cincinnati Bengals, whose starting quarterback (Andy Dalton) and top two wide receivers (A.J. Green and Tyler Boyd) all finished the season on injured reserve.

There’s a possibility that Baltimore will decide to overhaul its wide receiver group again. Crabtree is a potential cap cut candidate ($4.6 million savings) after his first season in Baltimore, but the Ravens might opt to keep him given the weak free-agent class and the challenge of signing free-agent receivers.

Brown, the other starting wide receiver, is an unrestricted free agent folllowing a disappointing finish to his season with the Ravens. In nine games with Joe Flacco, Brown caught 34 passes for 601 yards and four touchdowns. In seven with Jackson, Brown totaled eight receptions for 114 yards and one touchdown.

In cleaning out his locker earlier this month, Brown said he wants to continue playing for the Ravens.

“I’m sure things will change if I did come back, just finding ways to get the playmakers the ball,” Brown said. “But you know, I believe if I come back, it’ll probably be 50/50 balance.”

Even though Brown expressed a desire to stay (which is a common refrain for most players heading to free agency), the more likely scenario is he’ll find more money and opportunity elsewhere. It’s looking like the best way for Baltimore to add talent at wide receiver is through the draft. Several mock drafts have the Ravens taking a wide receiver in the first round, and ESPN draft analyst Mel Kiper Jr. has Baltimore selecting Ole Miss’ A.J. Brown with the No. 22 overall pick.

Harbaugh’s vision is to have a more diverse offense and incorporate the passing game more in Jackson’s first full season as an NFL starter.

“Next year, you’re going to want big plays, which we didn’t have enough of,” Harbaugh said. “You’re going to want to simplify the defense, which is going to open up your passing game, your three-, five-[drop] step in the passing game. You’re going to run the run-option plays that get the linebackers involved in defending the run, then throw behind them. Those are all things that you try build into the offense.”

Ultimately, if Jackson can build upon his passing numbers, it will be easier for him to recruit wide receivers to Baltimore.